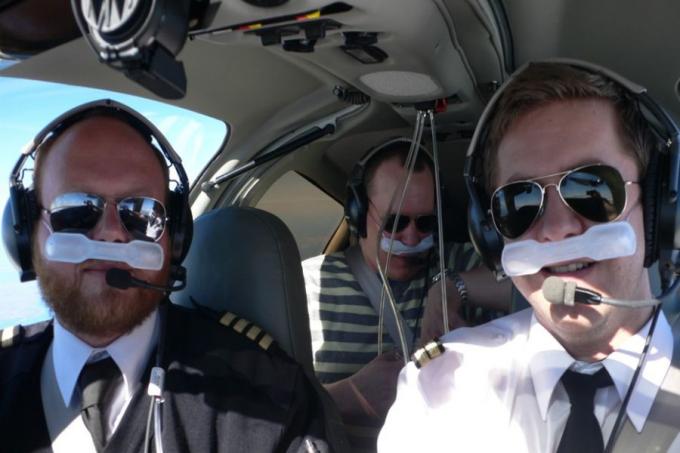 Hypoxia means “reduced oxygen” or “not enough oxygen”. Although any tissue will die if deprived of oxygen long enough, usually the most concern is with getting enough oxygen to the brain, since it is particularly vulnerable to oxygen deprivation. Any reduction in mental function while flying can result in life-threatening errors. Hypoxia can be caused by several factors, including an insufficient supply of oxygen, inadequate transportation of oxygen, or the inability of the body tissues to use oxygen. The forms of hypoxia are based on their causes: hypoxic hypoxia, hypemic hypoxia, stagnant hypoxia, and histotoxic hypoxia.

Hypoxic hypoxia is a result of insufficient oxygen available to the body as a whole. A blocked airway and drowning are obvious examples of how the lungs can be deprived of oxygen, but the reduction in partial pressure of oxygen at high altitude is an appropriate example for pilots. Although the percentage of oxygen in the atmosphere is constant, its partial pressure decreases proportionately as atmospheric pressure decreases. As the airplane ascends during flight, the percentage of each gas in the atmosphere remains the same, but there are fewer molecules available at the pressure required for them to pass between the membranes in the respiratory system. This decrease in number of oxygen molecules at sufficient pressure can lead to hypoxic hypoxia.

Hypemic hypoxia occurs when the blood is not able to take up and transport a sufficient amount of oxygen to the cells in the body. Hypemic means “not enough blood.” This type of hypoxia is a result of oxygen deficiency in the blood, rather than a lack of inhaled oxygen, and can be caused by a variety of factors. It may be due to reduced blood volume (due to severe bleeding), or it may result from certain blood diseases, such as anemia. More often hypemic hypoxia occurs because hemoglobin, the actual blood molecule that transports oxygen, is chemically unable to bind oxygen molecules. The most common form of hypemic hypoxia is CO poisoning. This is explained in greater detail on page 16-11. Hypemic hypoxia can also be caused by the loss of blood due to blood donation. Blood can require several weeks to return to normal following a donation. Although the effects of the blood loss are slight at ground level, there are risks when flying during this time.

Stagnant means “not flowing,” and stagnant hypoxia, or ischemia, results when the oxygen-rich blood in the lungs is not moving, for one reason or another, to the tissues that need it. An arm or leg “going to sleep” because the blood flow has accidentally been shut off is one form of stagnant hypoxia. This kind of hypoxia can also result from shock, the heart failing to pump blood effectively, or a constricted artery. During flight, stagnant hypoxia can occur with excessive acceleration of gravity (Gs). Cold temperatures also can reduce circulation and decrease the blood supplied to extremities.

The inability of the cells to effectively use oxygen is defined as histotoxic hypoxia. “Histo” refers to tissues or cells, and “toxic” means poisonous. In this case, enough oxygen is being transported to the cells that need it, but they are unable to make use of it. This impairment of cellular respiration can be caused by alcohol and other drugs, such as narcotics and poisons. Research has shown that drinking one ounce of alcohol can equate to about an additional 2,000 feet of physiological altitude.

High-altitude flying can place a pilot in danger of becoming hypoxic. Oxygen starvation causes the brain and other vital organs to become impaired. One noteworthy attribute of the onset of hypoxia is that the first symptoms are euphoria and a carefree feeling. With increased oxygen starvation, the extremities become less responsive and flying becomes less coordinated. The symptoms of hypoxia vary with the individual, but common symptoms include:

Cyanosis (blue fingernails and lips)
Headache
Decreased reaction time
Impaired judgment
Euphoria
Visual impairment
Drowsiness
Lightheaded or dizzy sensation
Tingling in fingers and toes
Numbness
As hypoxia worsens, the field of vision begins to narrow, and instrument interpretation can become difficult. Even with all these symptoms, the effects of hypoxia can cause a pilot to have a false sense of security and be deceived into believing everything is normal. The treatment for hypoxia includes flying at lower altitudes and/or using supplemental oxygen.

All pilots are susceptible to the effects of oxygen starvation, regardless of physical endurance or acclimatization. When flying at high altitudes, it is paramount that oxygen be used to avoid the effects of hypoxia. The term “time of useful consciousness” describes the maximum time the pilot has to make rational, life-saving decisions and carry them out at a given altitude without supplemental oxygen. As altitude increases above 10,000 feet, the symptoms of hypoxia increase in severity, and the time of useful consciousness rapidly decreases.

FAA Instrument Rated Pilot and an Orthopedic at The Same Time